skip to main | skip to sidebar

Most college students dread group projects. The likely source of my group project frustrations is my "control freak" personality -- a true micromanager. But, my loathing of these projects has lessened after just completing a 19-person (oh yes, 19!!!) project for new media.

The assignment was to create a mobile media product that would change the world. Check out Rethink Receipts very low-tech Web site for the details. Basically, we conserve paper and frustrations by digitizing receipts and creating an iPhone application to manage them. Cool, huh?

Of course, just days ago, I came across Mashable's review of GroupTable, a new Web-based software to help coordinate project planning. Ah! How handy this would have been for our 19-person group. 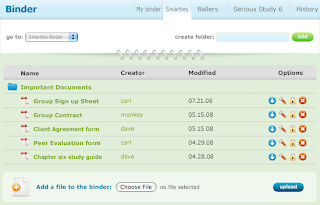 I haven't explored the software yet, but it seems like you can get pretty much the same benefit from a Google Group. Has anyone tried out GroupTable yet? What online collaboration software do you use?
Posted by Lizzie Azzolino at 3:43 PM 1 comment:

Have you tried the new Twitter interface, iTweet? I struggled with TweetDeck, twhirl and others and always resort back to the traditional Twitter Web site, but iTweet gets 5 stars, with built-in auto-refresh and search capabilities. Best of all, it's iPhone compatible and refreshes quickly. 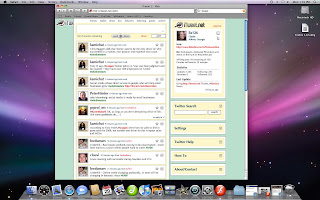 A huge shout out to UGA's PRSSA chapter! Proof that ProfNet queries do in fact pay off, our student-run firm, Creative Consultants, is featured in this PR Week article about real-world PR lessons.
I just registered with 2Sense Online, a new site catering to young professionals and offering a variety of information (career advice, money tips, relevant news) in one place. I'm especially interested in the City Profile section. As my peers and I are on the job hunt, these quick reference guides to cities' demographics, economy and events are useful. I'm staying tuned to see how this site progresses. Can you recommend other online resources for young professionals?
Ladies, start wearing red to attract a man. This idea was discussed on the Today Show Tuesday after a study confirmed that red "drives men wild." Unfortunately, red's just not my color.
Posted by Lizzie Azzolino at 10:19 AM No comments:

Once again, I've been MIA. It seems to be a recurring trend, but no more! I'll start by sharing a few things I stumbled upon over the past few weeks that are pretty cool.

Posted by Lizzie Azzolino at 9:34 AM No comments:

A novel written 140 characters at a time

While I've been MIA from this blog over the summer, I didn't give up blogging all together. I've been contributing to the blog for the upcoming UGA Connect (it's going to be awesome!) and to the Athens Jackson Spalding crew's blog, The Inbox.

But, I'm back to it. As a part of the new media program, we are asked to point out a notable bit of news related to new media tech. Dr. Shamp always does a great job on his blog.

This week I came across a unique idea courtesy of the New York Times. Are you one of the many addicted to Twitter? Well, if you're not, maybe this will get you interested... A few authors have thrown out the traditional pen and paper for mobile phone/keyboard and started typing their novels in real time, just 140 characters at a time.

One author has been using Twitter to write a real-time thriller for the past two month. Enter the "Twiller."

It's about a man who wakes up in the mountains of Colorado, suffering from amnesia, with a haunting feeling he is a murderer. In possession of only a cellphone that lets him Twitter, he uses the phone to tell his story of self-discovery. Think Memento on a mobile phone, with the occasional emoticon.

Clever idea. What are some other creative ways to use Twitter?
Posted by Lizzie Azzolino at 12:18 PM 1 comment:

The day has come... I start my internship at a PR agency tomorrow. I can't wait! I'm especially looking forward to working with a client I interned with last summer. (What are the chances?!)

I'll be following my real-life and virtual friends' summer experiences, too. Maybe you'll be interested in reading about:
As my friends & I (and maybe you) start our internships, here are a few posts with suggestions on making the best of the experience:
What advice do you have for PR interns? Do you have a great PR internship this summer? I'd like to read all about it on your blog!

Good luck to everyone!
Posted by Lizzie Azzolino at 3:30 PM 5 comments: